This is no April’s Fool. I’m happy to share with you Vina Arno’s new release In His Corner, a contemporary romance set in the dramatic boxing world. It releases April 14, but here’s a sneak peak at this sexy romance between a boxer and a good doctor.

About In His Corner

No sex for almost a year could kill a guy, but when you’re the boxer known as the Juggernaut, it’s the price you pay for turning pro. Tommy’s fully dedicated to his craft, until he meets the incredibly gorgeous Dr. Siena Carr. Now he’s looking forward to taking on this prim and proper lady in a wet and wild workout…

Siena has seen many patients come through the ER, but none as sexy as Tommy Raines. With a nasty cut over his eye, she knows he needs stitches, but after he takes off his shirt, she needs some air. With rock-hard abs and taut biceps, it’s clear this man takes care of his body. And all Siena can think about is letting him take care of hers…

Dr. Siena Carr dropped the clipboard on the counter and washed her hands. When she turned around, she gasped. “What are you doing?”

The Juggernaut was undressing. Before she could say another word, he was naked. A glorious sight that sent her heart racing and her face burning. Did he know that he looked like a sculpture by Michelangelo? Except for the tattoo on his right shoulder, this man was David incarnate.

She looked away abruptly, grabbing the clipboard. She didn’t even know his name! She looked at his paperwork. Tommy Raines. “Mr. Raines, please put on your clothes.”

She faced him. Thank God, he was clothed again.

“Sorry about that,” he said. “I thought you’re supposed to check me out.”

Did he just say check him out? “Mr. Raines, this is an ER, not a bar. I don’t check out patients. Do you mean to say check up?”

“I’m going to take care of your cut, but I’m not doing a checkup. If you need one, you should go to your primary care doctor.”

“I don’t like doctors. I avoid hospitals and clinics as much as possible, but my cut kept bleeding even after I showered. So here I am.”

In His Corner by Vina Arno, published by Lyrical Press/Kensington Publishing, will be released on April 14, 2015. You can pre-order the book at: 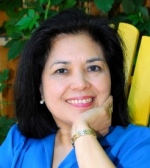 Vina Arno is a pen name used by Cindy Fazzi, a Philippine-born American writer who has worked as a journalist in the Philippines, Taiwan, and the United States. Her short stories have been published in the Snake Nation Review, Copperfield Review, and SN Review. She’s also been profiled by Forbes Magazine.

2 thoughts on “New Release: In His Corner by Vina Arno”

Bringing History to Life
with Adventure and Romance!

My debut medieval romance Siege of the Heart is now available: